The 10th (Irish) Division was formed under the first 100,000 of Kitchener ‘New Army’.
It was commanded by Lt. Gen Sir Bryan Mahon KCVO DSO. 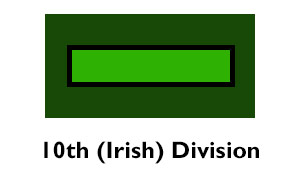 After training in Ireland, the Division moved to Basingstoke in May 1915 and on, 1st July 1915, was ordered to embark for Gallipoli.

Militarily, the campaign was a shambles, but the soldiers fought bravely under very difficult conditions – heat, thirst, hunger, flies, and the ever-present stench of the unburied bodies, which lay in ravines throughout the battlefield. Battles continued through August, but by September both sides were content to hold their lines, until the Allies evacuated on 19-20 December 1915. Some 3,500 10th (Irish) Division officers and men lost their lives in the Gallipoli campaign. 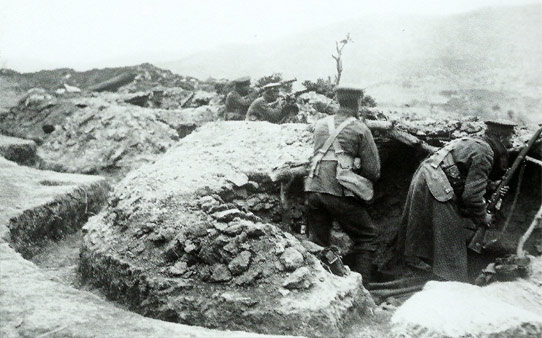 However, the 10th (Irish) Division was withdrawn from Gallipoli on 30th September, re-deployed to Salonica and remained there for two years, taking part in the Battle of Kosturino.

In September 1917, the Division was moved from Macedonia to Egypt, and on to Palestine. It took part in the 3rd Battle of Gaza and the Capture of Jerusalem.

Following the March 1918 German Spring Offensive on the Western Front, all but one of the 10th Division’s British battalions were transferred to France and replaced with Indian troops; the Division ceased to be ‘Irish’. It remained in Palestine until the end of the war with Turkey on 31st October 1918.